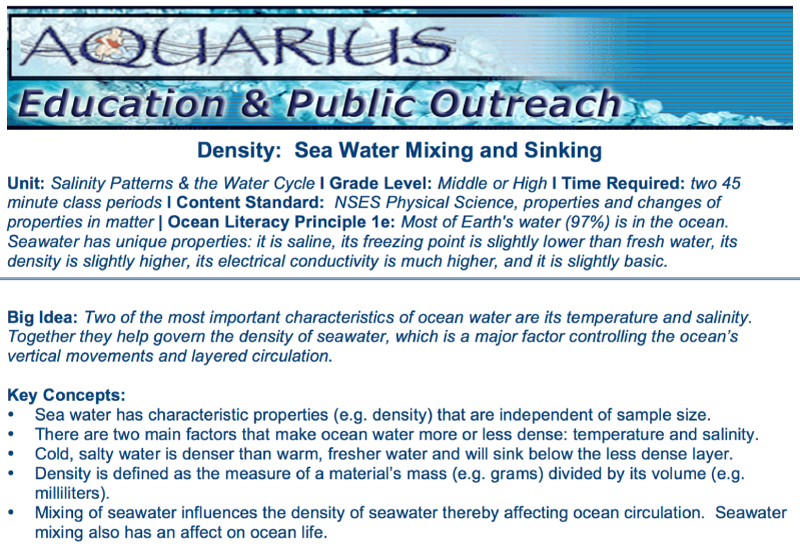 Source: NASA Aquarius
[22-Feb-10] In the oceans, the salinity varies over time and from place to place. Typical open ocean salinities vary between 33 and 36 PSU (Practical Salinity Units), equivalent to 33-36 parts per thousand. Two of the most important characteristics of ocean water are its temperature and salinity. Together they help govern the density of seawater, which is the major factor controlling the ocean's vertical movements and layered circulation. This activity investigates the role of temperature and salinity in determining seawater density. It does so by using a Temperature-Salinity (T-S) Diagram to examine the effect of mixing on density. Such mixing can be a significant factor in causing surface seawater to sink as part of vertical circulation. The T-S Diagram is a simple, but powerful tool used in studies of seawater density, mixing, and circulation. In a T-S diagram, temperature is plotted along the vertical axis in degrees Celsius and salinity is measured along the horizontal axis in PSU. Seawater density is illustrated in the diagram by curved lines of constant density. Surface waters are mixed by winds and deep ocean water mixing is driven by density differences. Circulation in the depths of the ocean is referred to as thermohaline circulation. The deep ocean is layered with the densest water on bottom and the least dense water on top. Water tends to move horizontally throughout the deep ocean, moving along lines of equal density. Vertical circulation is limited because it is easier for water to move along lines of constant density (isopycnals) than across them.