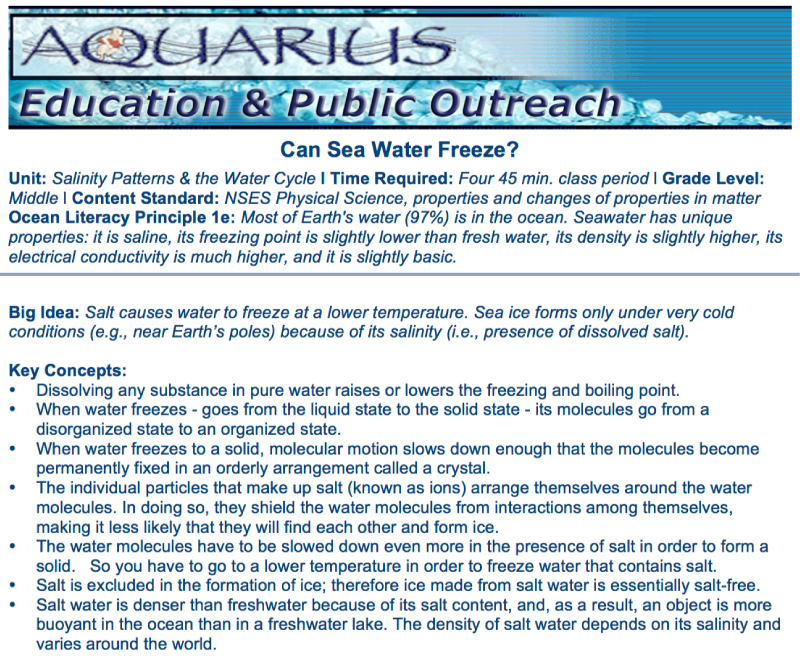 Can Seawater Freeze?
Can Seawater Freeze? (PDF, 2.1 MB) »
Source: NASA Aquarius
[12-Feb-2010] Under normal conditions, ordinary fresh water freezes and melts at 0°C, or 32°F. If water and ice are at 0°C, which is the melting point of ice and the freezing point of water then molecules of ice are escaping into the water (melting), and molecules of water are being captured on the surface of the ice (freezing). When the rate of freezing is the same as the rate of melting, the amount of ice and the amount of water won't change. The ice and water are said to be in dynamic equilibrium with each other, therefore there is no net change in either quantity. This balance will be maintained as long as the water stays at 0°C, or unless something happens to favor one of the processes over the other. For example, when the water temperature is dropped to -10°C the molecules of water are moving more slowly, i.e. they contain less heat. These slower-moving water molecules are more easily captured by the ice, and freezing occurs at a greater rate than melting. Because there are more water molecules being captured by the ice (being frozen) than there are ice molecules turning to water, the net result is that the amount of water decreases, and the amount of ice increases. Adding salt disrupts the equilibrium. The individual particles that make up salt (known as ions) arrange themselves around the water molecules. In doing so, they shield the water molecules from interactions among themselves, making it less likely that they will find each other and form ice. This means that the number of water molecules captured by the ice (frozen) is reduced, so the rate of freezing is also reduced. The rate of melting of the ice is unchanged by the presence of the salt. In order to return the system to equilibrium, where the number of molecules of water that are freezing is equal to the number of ice molecules that are melting (remember this is the freezing/melting point), we must lower the temperature sufficiently to slow down the water molecules so that they can become part of the ice formation. The higher the concentration of salt, the lower the freezing point drops. Any foreign substance, such as sugar, alcohol, or any chemical salt, added to the water, forms a solute, which will lower the freezing point and melt ice. This is why salt is used to melt snow and ice on roadways and sidewalks. Salt is also inexpensive and readily available. The melting action of salt forms brine, or a strong saline solution, that can penetrate below the surface of ice and packed snow. Brine prevents water from freezing and bonding to a surface. When ice melts due to the presence of salt, heat is absorbed. This is called an endothermic reaction. Does the size or quality of the salt placed into solution affect the freezing/melting point, e.g. iodized table salt vs. kosher salt vs. rock salt? Actually it doesn't matter how they are packaged or processed, once dissolved the salt molecules are so tiny compared to the distance they move through the liquid that size is not a factor.

Per Student Group: 2 plastic beakers or similar containers, crushed ice, 2 unfrozen "freeze pops," measuring cup, thermometer, graph paper, rock salt, balance. Lab Safety Reminders: The freeze pops are not to be consumed if they are being used in a laboratory experiment. Also, use a plastic beaker or scoop to distribute crushed ice, do not use a glass beaker to scoop the ice.
Can Seawater Freeze? (PDF, 2.1 MB) »