The amount of dissolved salt in the ocean is relatively stable. However, the flux of freshwater into and out of the sea is always changing. Salinity patterns help to discern the water cycle over the ocean, where most of the world's evaporation and precipitation occurs.

Sea surface salinity is key to understanding how freshwater moves into and out of the ocean system. Using satellite data from Aquarius and SMAP, scientists are now able to relate salinity variations to evaporation and precipitation, providing insight into how the ocean responds to seasonal and annual changes in the water cycle. Use the resources on this page to learn more about how water circulates around the globe. 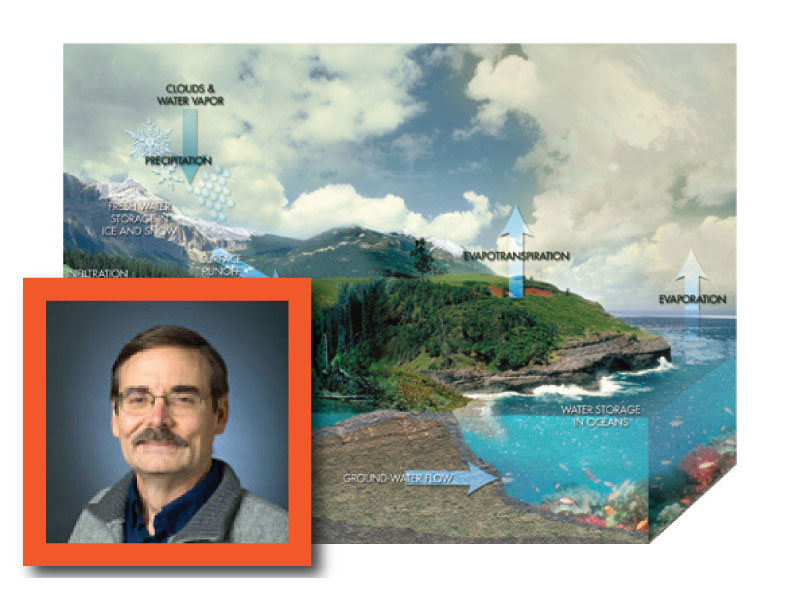 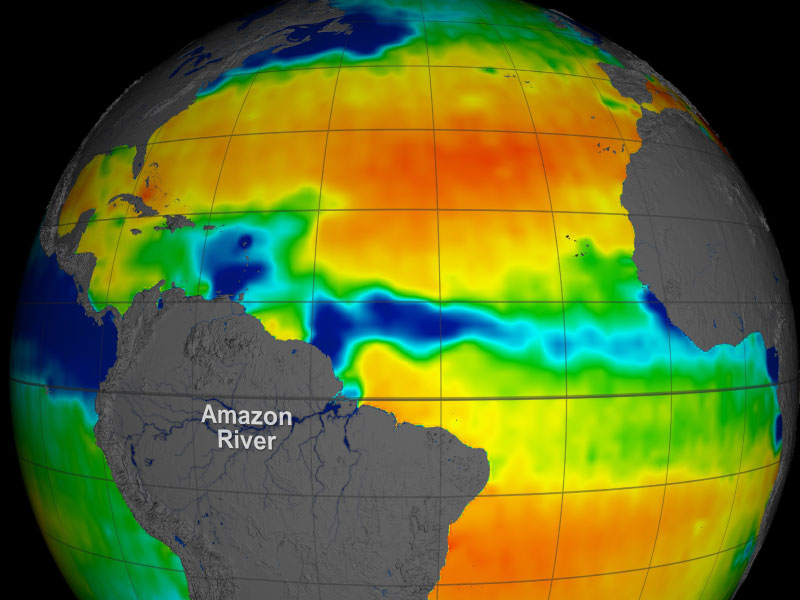 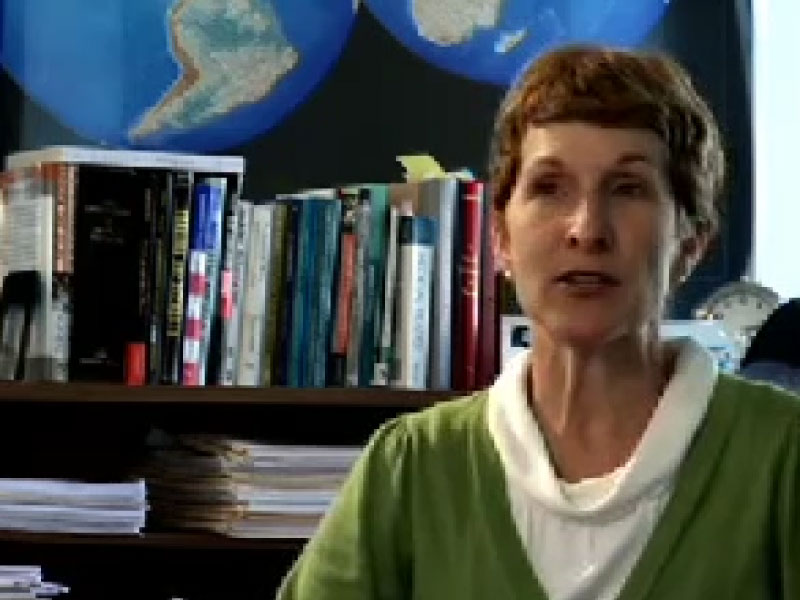 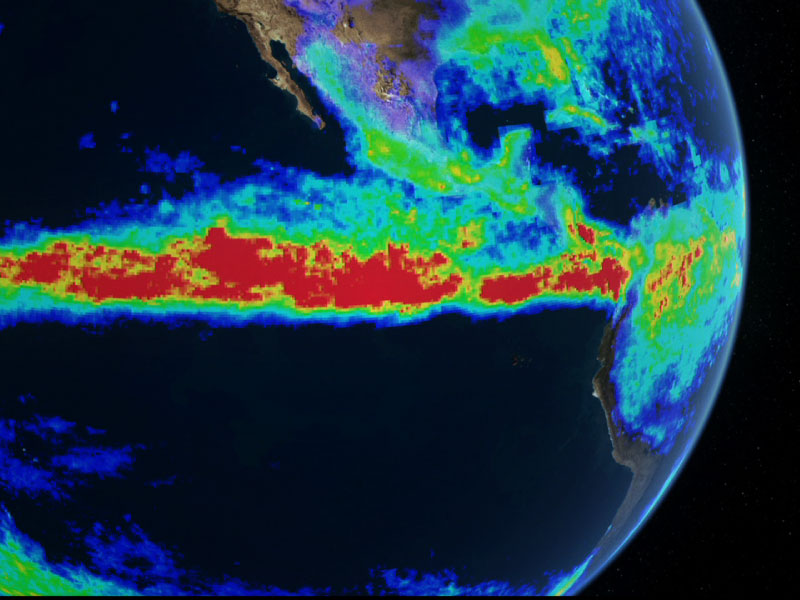 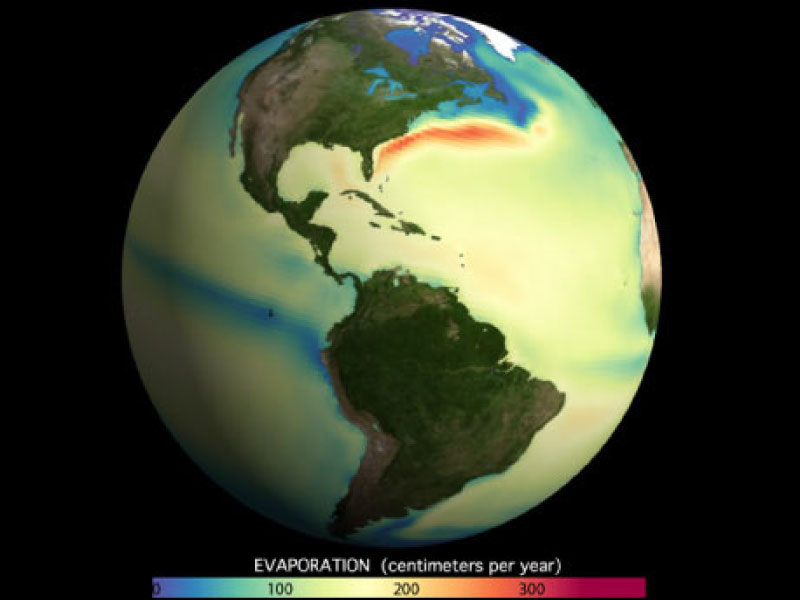 Evaporation and Precipitation in the Western Hemisphere
[more]
image 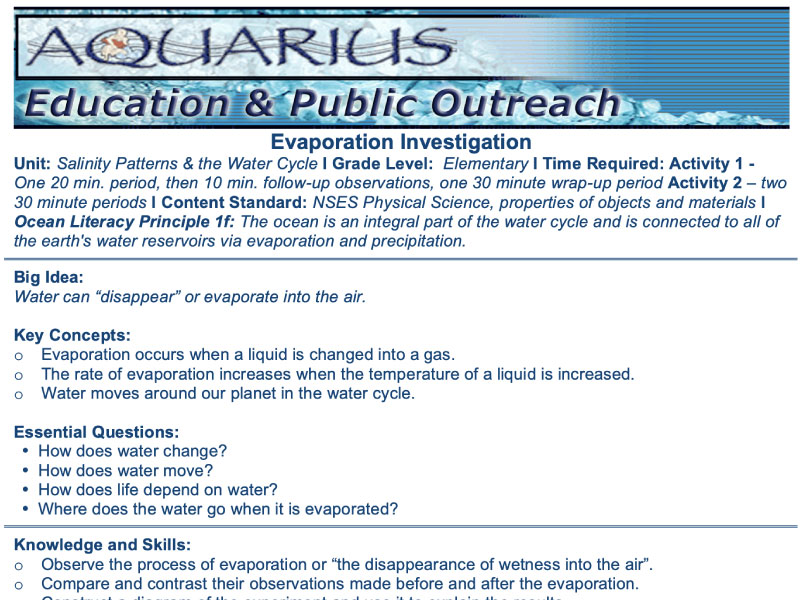 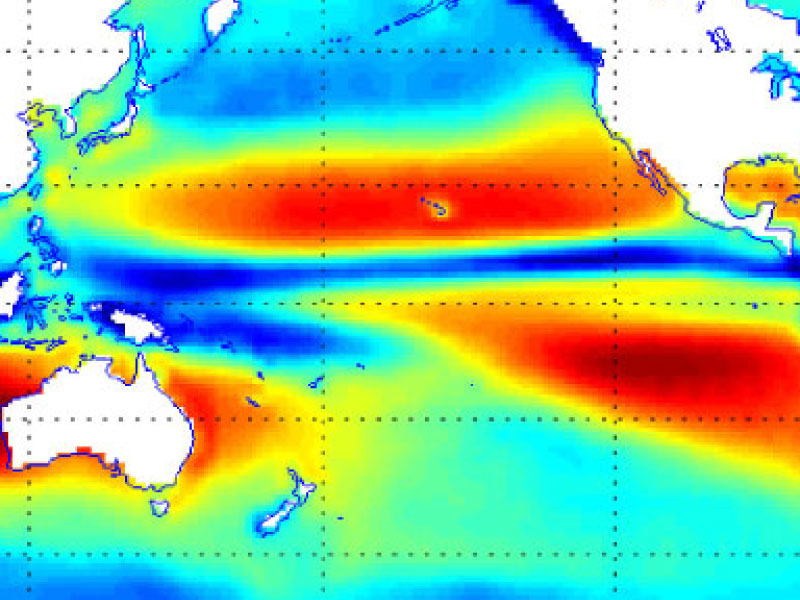 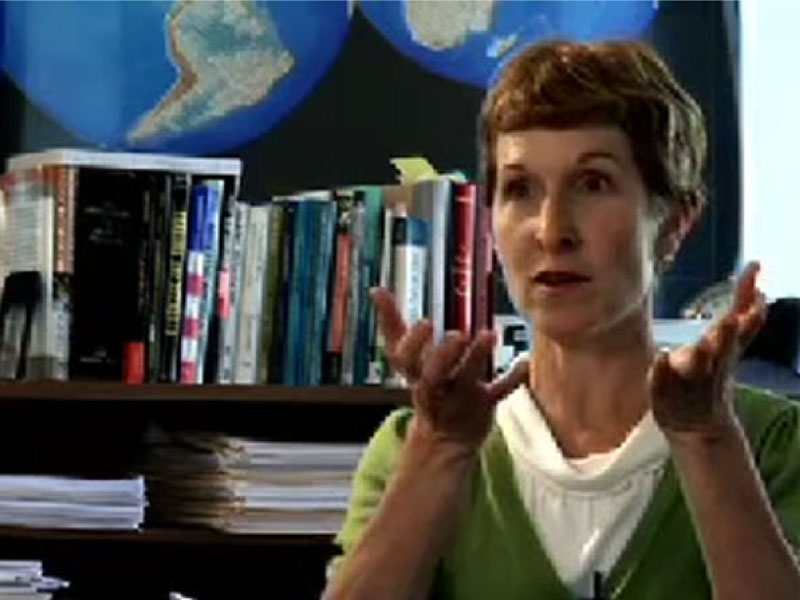 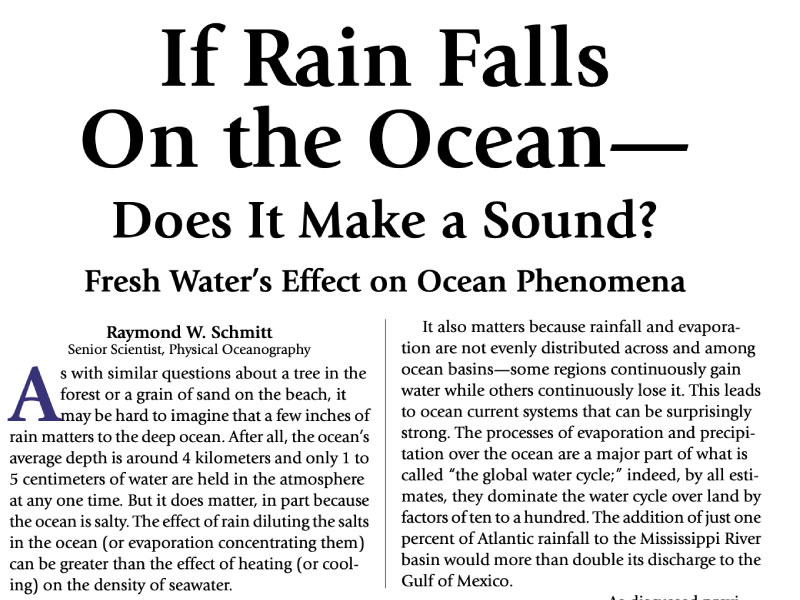 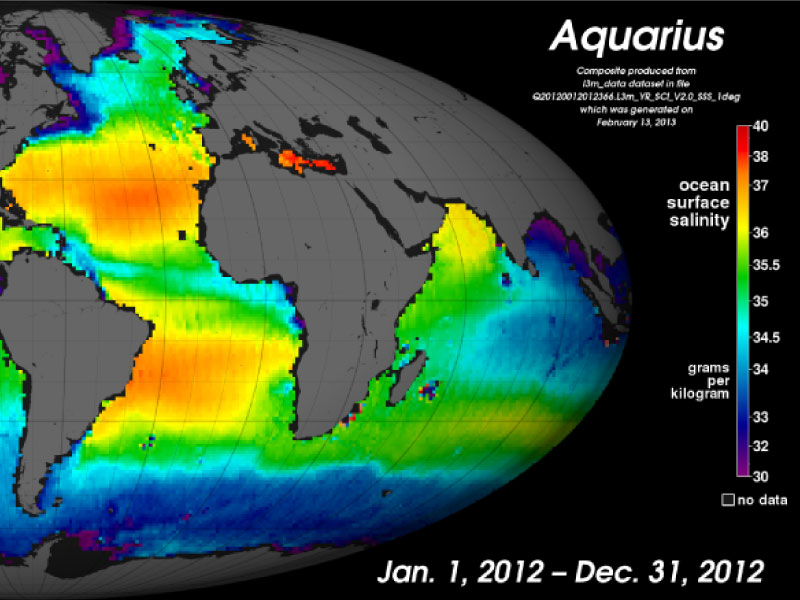 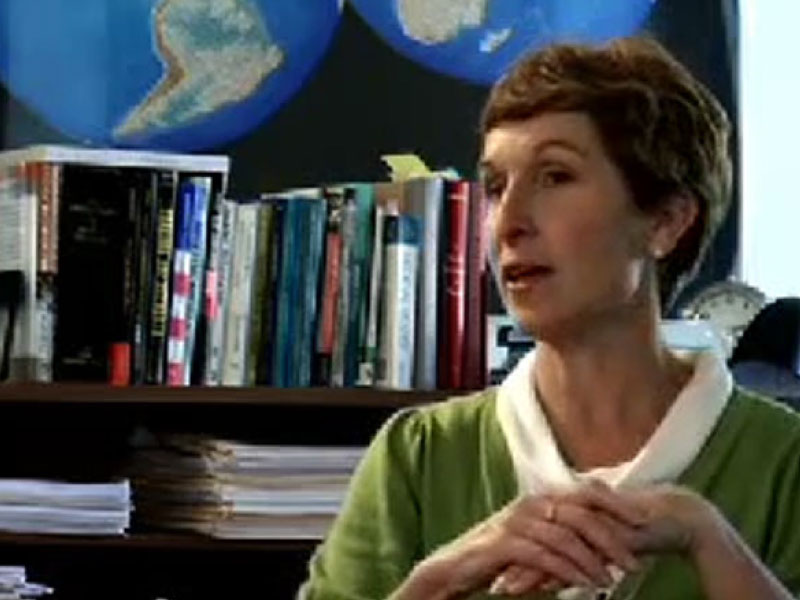 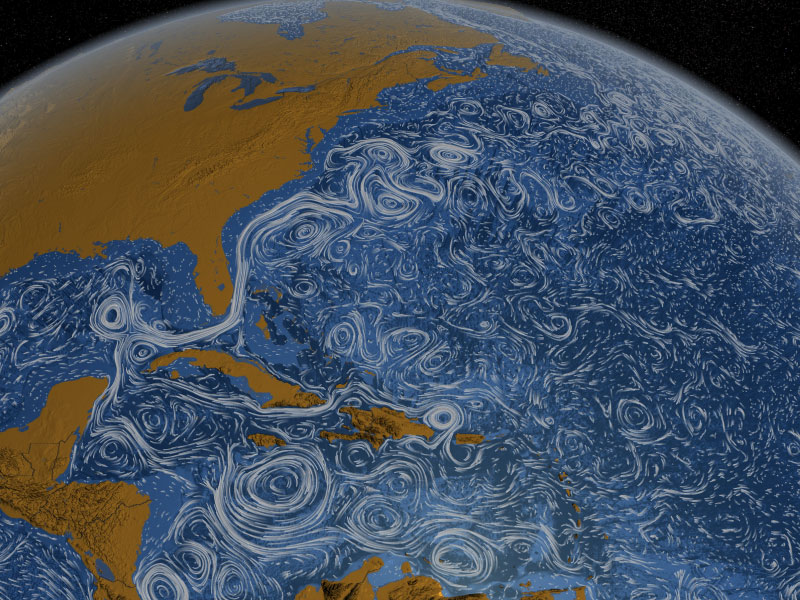 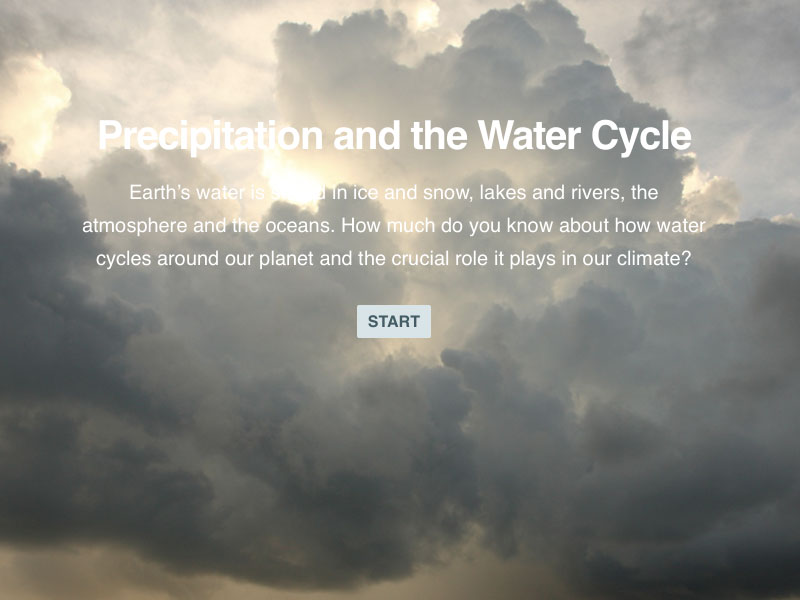 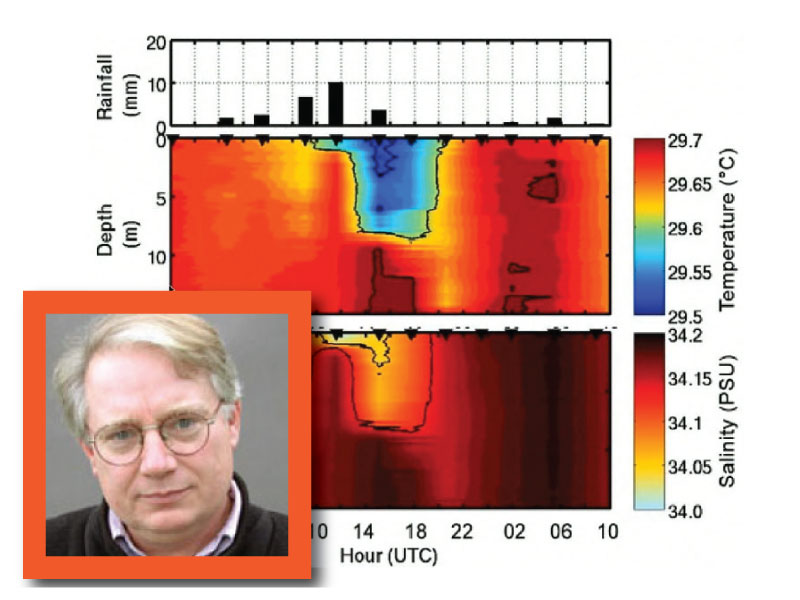 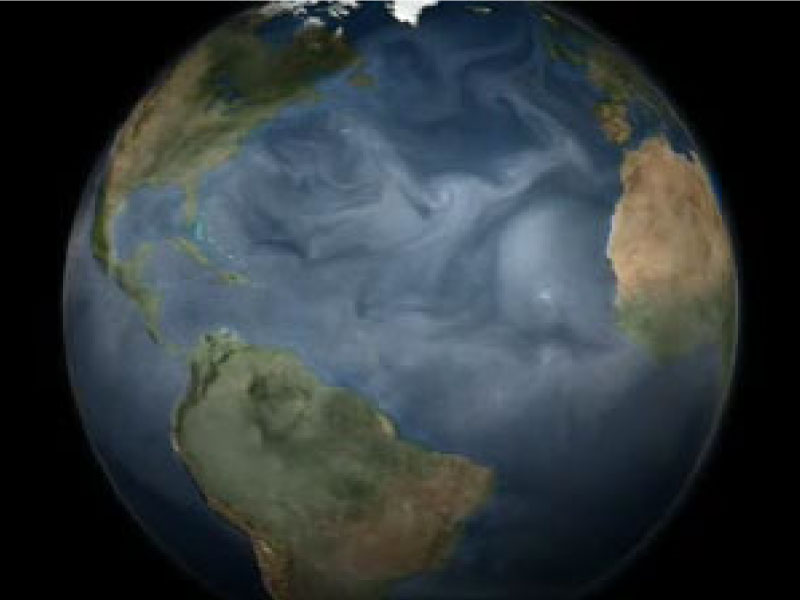 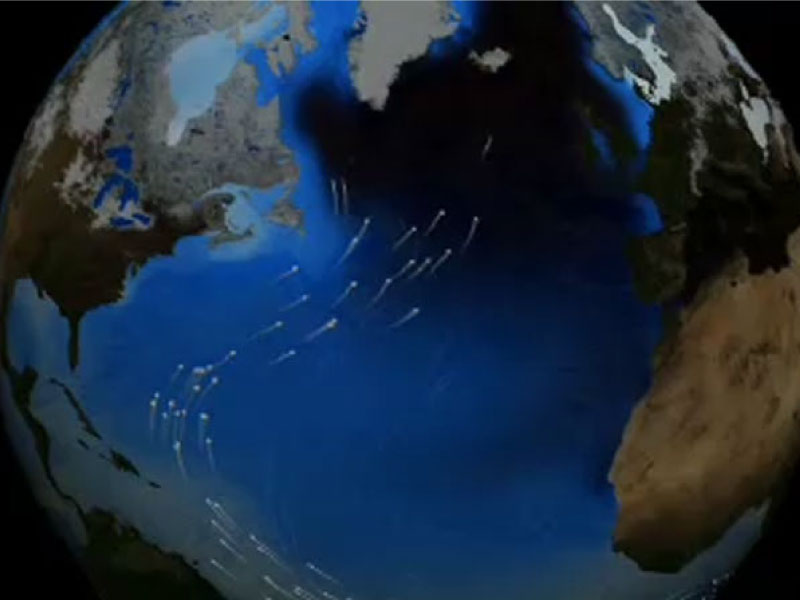 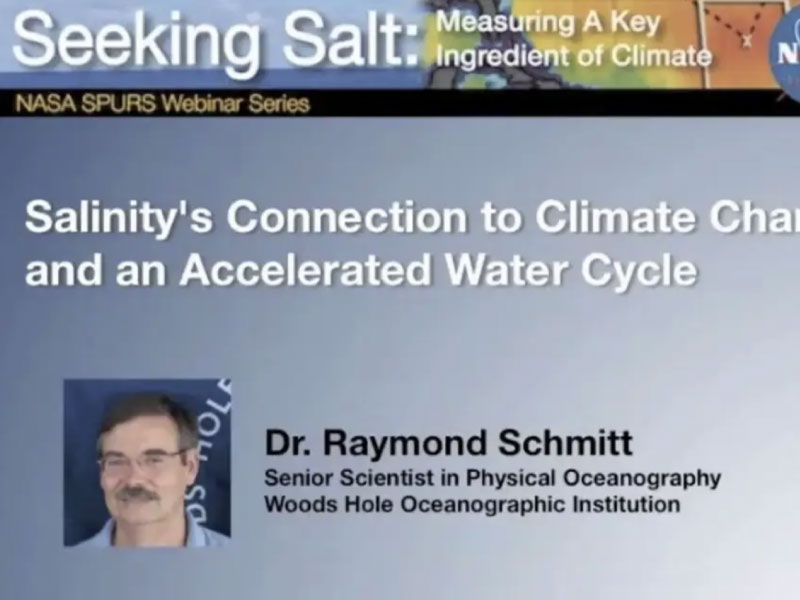 The Role of Evaporation and Precipitation
[more]
movie | MP4 (75.7 MB) 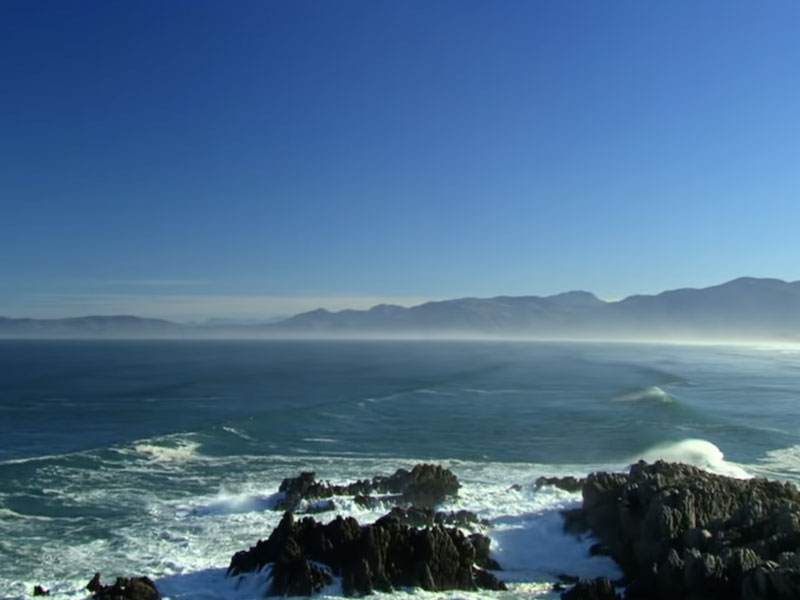 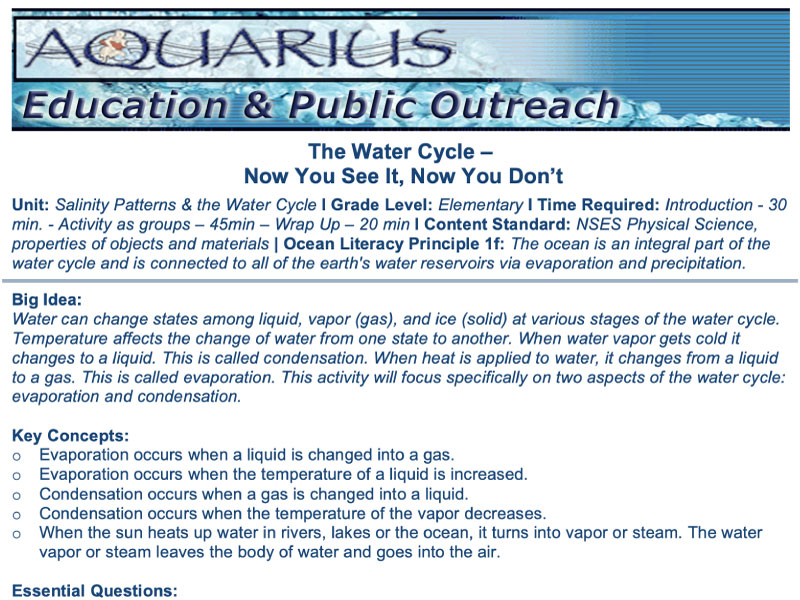 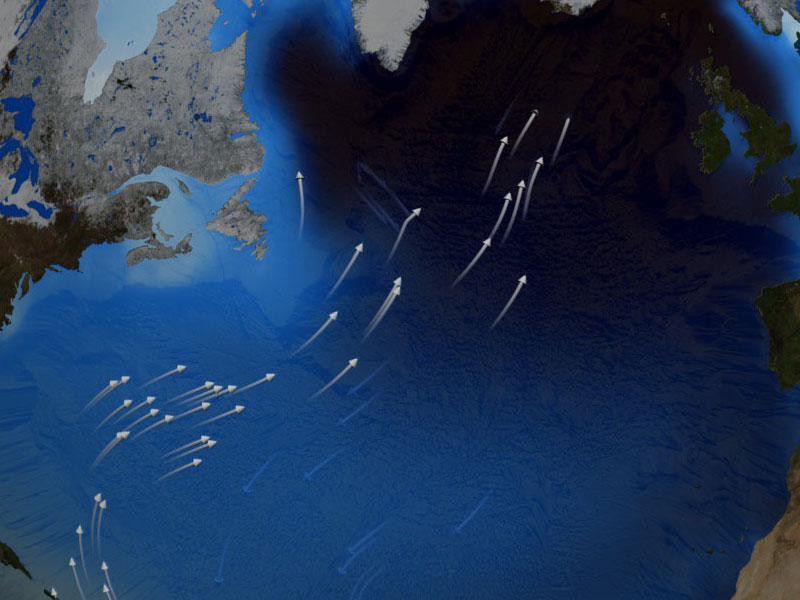 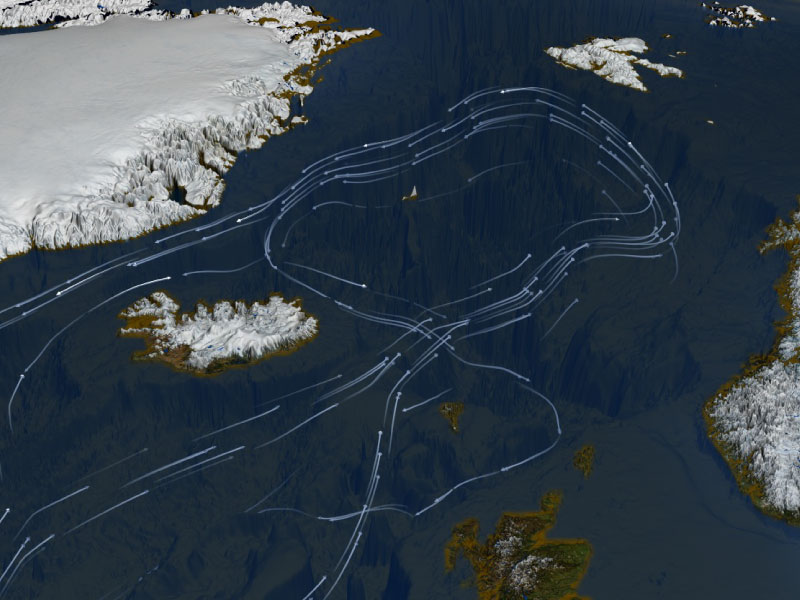 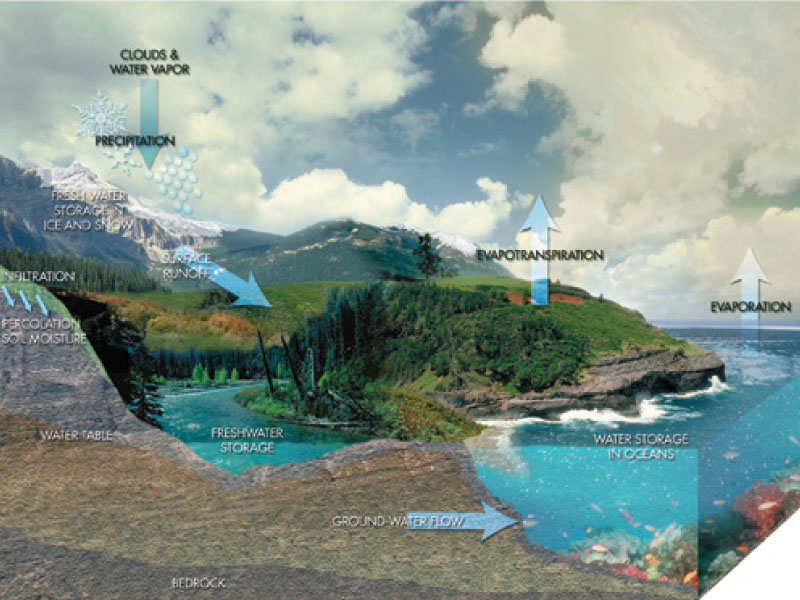 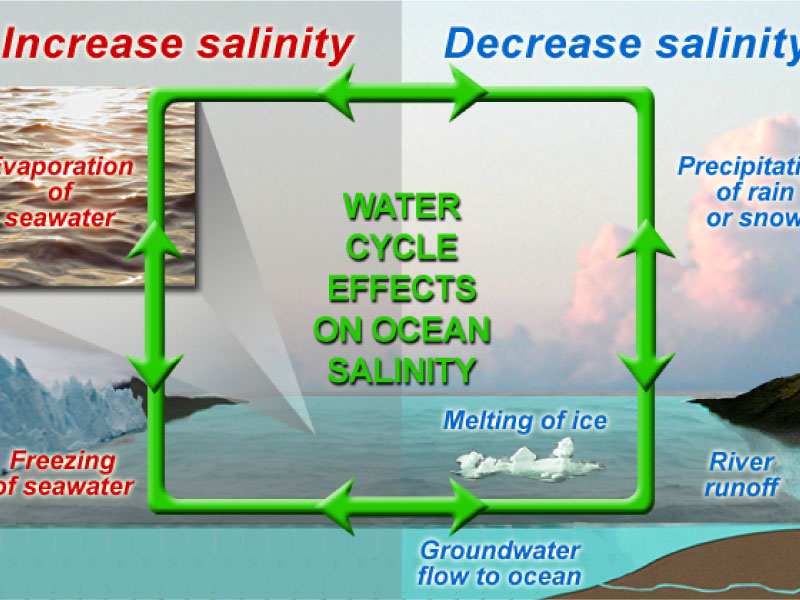 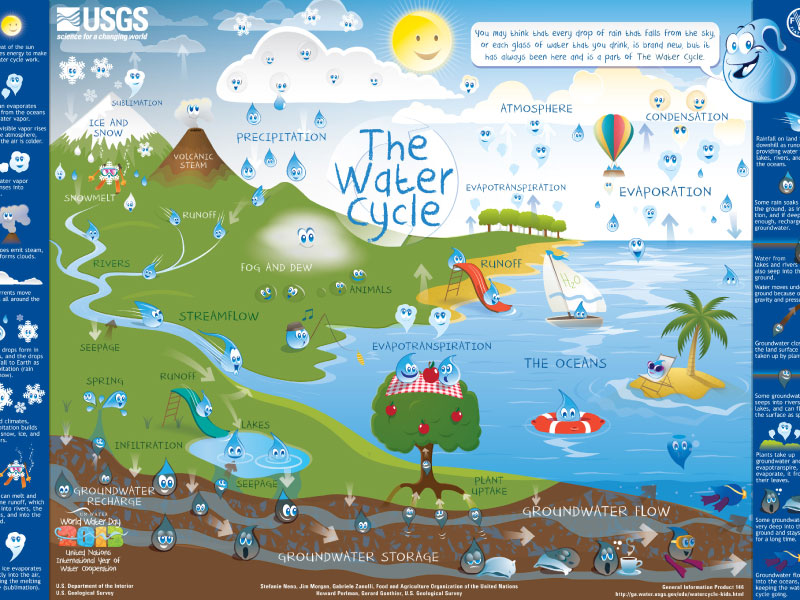 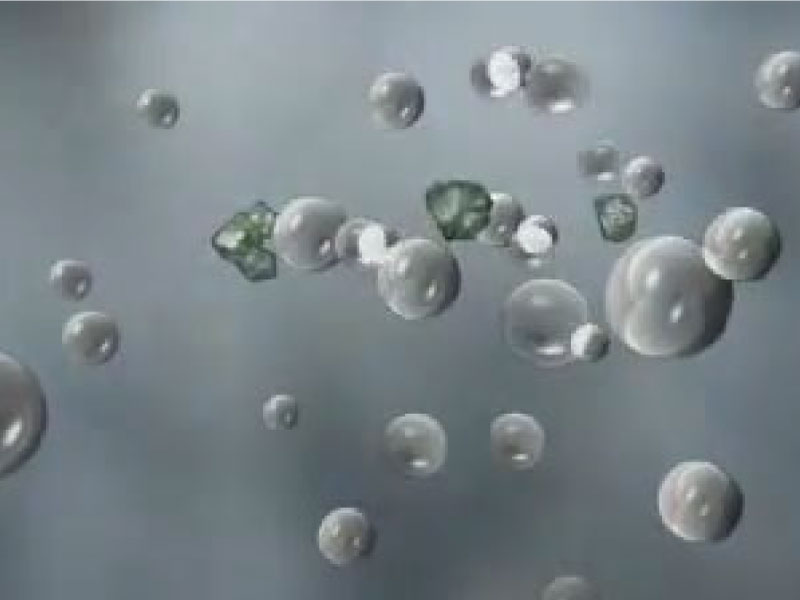 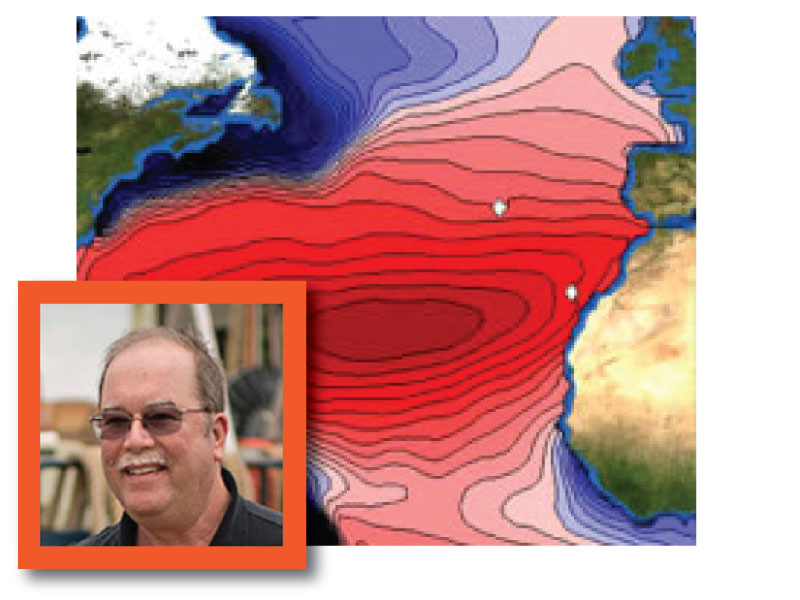 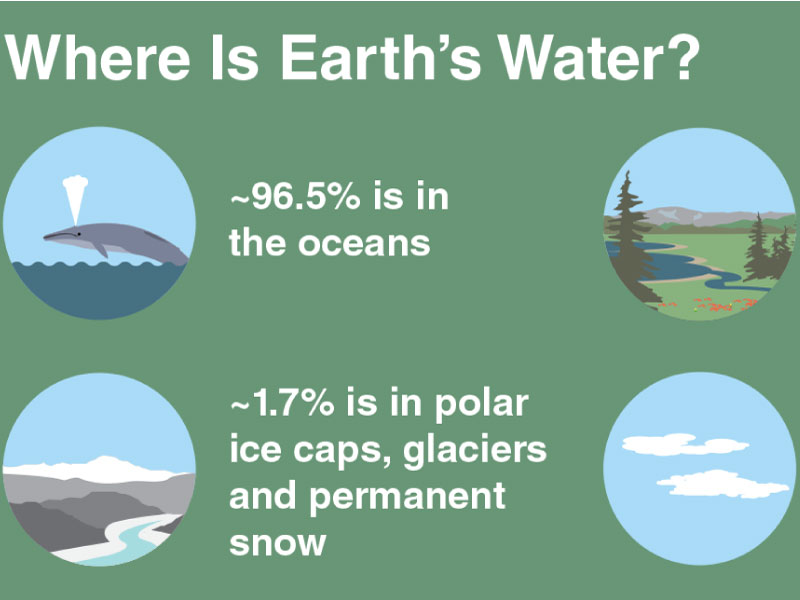 Where is Earth’s Water?
[more]
image

There's no such thing as absolute good or bad, right? In certain areas, you want to monitor the change, that's really the key. You want to see whether the area's freshwater gets fresher, you know, and if the salty water gets saltier. That represents the speeding up or slowing down of the water cycle. So you ask the questions: do we have more evaporation as we change the climate? Do we have more freshwater melting? All these questions are related.

Mostly due to the land-sea contrast (located between two major continents). It is also smaller than the Pacific.

There are quite a lot of interesting discoveries the science community has been finding from the Aquarius data over the ocean. The dynamics involving fresh water from precipitation and how it mixes with upper layers of the ocean is of special interest. Satellites measure salinity at the surface. We also use ocean buoys, but readings use conductivity sensors to measure salinity at a depth of about five meters, a depth at which algae is less likely to grow. We know that the surface layer, aerated by wave motion and carrying warm water in the tropics, is conducive to algae growth. Sensors placed closer to the surface would become fouled with algae and no longer function. At a depth of five meters, algae growth is discouraged, the increased salinity at depth acts much the same as chlorine would in a swimming pool. The ever-changing salinity dynamic in the top five meters of the oceans has recently become a topic of great interest to oceanographers and climate scientists. Its understanding is now seen as a key factor in predicting weather patterns and changing climate.