"To everything (turn, turn, turn) there is a season (turn turn turn)" – The Byrds

We observe the seasons around us. You may experience long winters and mild summers or mild winters and hot/humid summers. Or perhaps you live in the tropics where temperatures are relatively constant but the seasons are "wet" and "dry."

Salinity in our ocean also has seasonal patterns. It generally rises and falls in one cycle per year. In other words, most places have annual high and low salinities. When it comes to salinity, tropical areas have the largest seasonal cycle of salinity. These patterns are unlike ocean temperature, where mid-latitude areas show the greatest variation throughout the year.

What causes salinity to change during the year? It is not about adding or removing salt from ocean basins, it's about adding or removing freshwater. The primary ways that freshwater is removed from the ocean are evaporation or the freezing of seawater (i.e., making sea ice). On the other hand, freshwater is added to the ocean by precipitation, ice melt, and river runoff. So, changes in ocean salinity are tied to the global water cycle... which is, of course, seasonal.

These composite maps show global sea surface salinity averaged by season. Data are from the Aquarius satellite mission. More information on these maps and their data can be found here.
Eastern Tropical Pacific 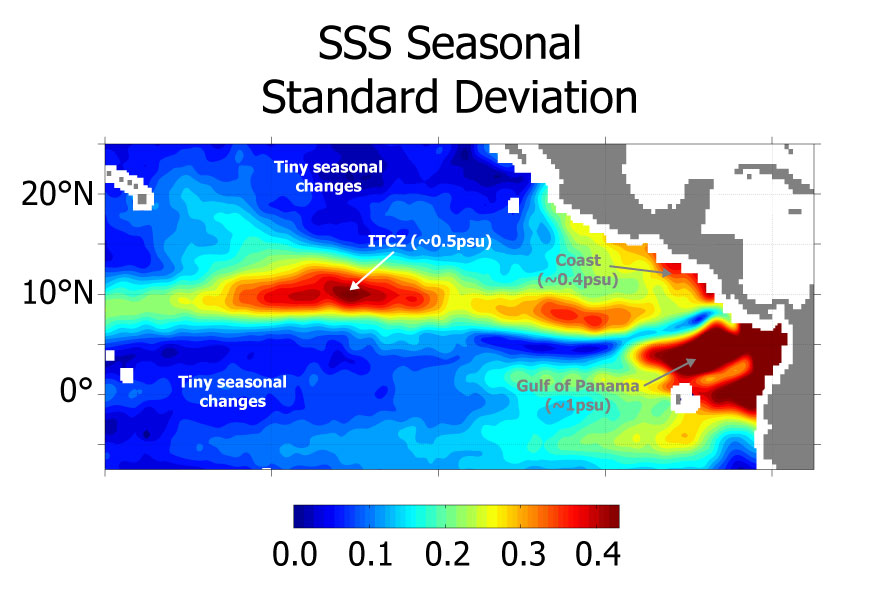 Standard deviation of the sea surface salinity seasonal cycle in the Eastern Tropical Pacific ranges from near zero (blue) to 1 psu with the largest values (red) focused in two areas - a band along 8°-12°N related to seasonal changes in rainfall in the Inter-Tropical Convergence Zone and the Gulf of Panama. Credit: Melnichenko, et al. (2019).
Northwest Atlantic 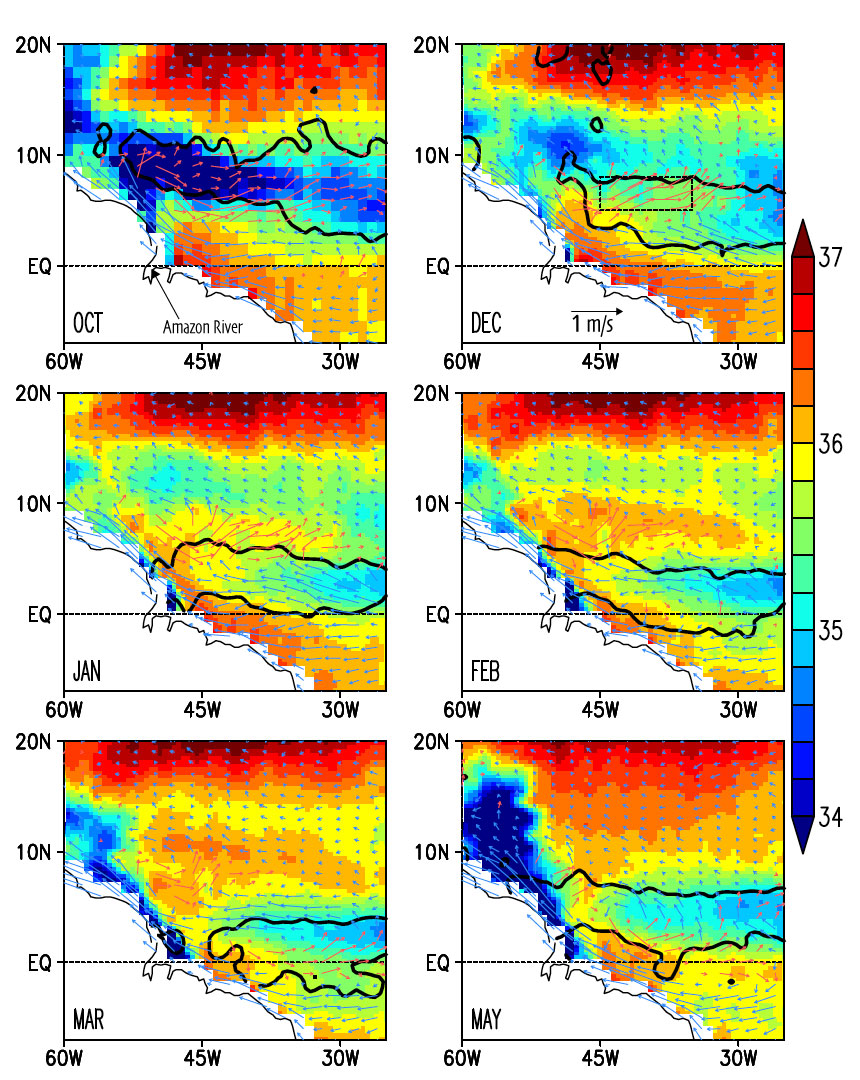 Seasonal salinity dynamics in the northwestern tropical Atlantic. Monthly averaged Aquarius sea surface salinity data are shown as colored shading, with surface currents from drifters as arrows. Seasonal salinity dynamics in the northwestern tropical Atlantic are largely influenced by the discharge of the Amazon River, the big blue plume in the March, May, and October maps. An interesting thing happens, however, when flow of the Amazon dies down - December and January maps. The high salinity water just south of the Amazon becomes entrained in the North Brazil Current (blue arrows flowing to the northwest along the coast) and creates an area of maximum salinity around 8°N which you can see as the orange blob in February and March maps. Once the discharge of the Amazon picks up again, this transport of high salinity water is cut off. Credit: Grodsky, et al. (2014).
Subpolar North Atlantic 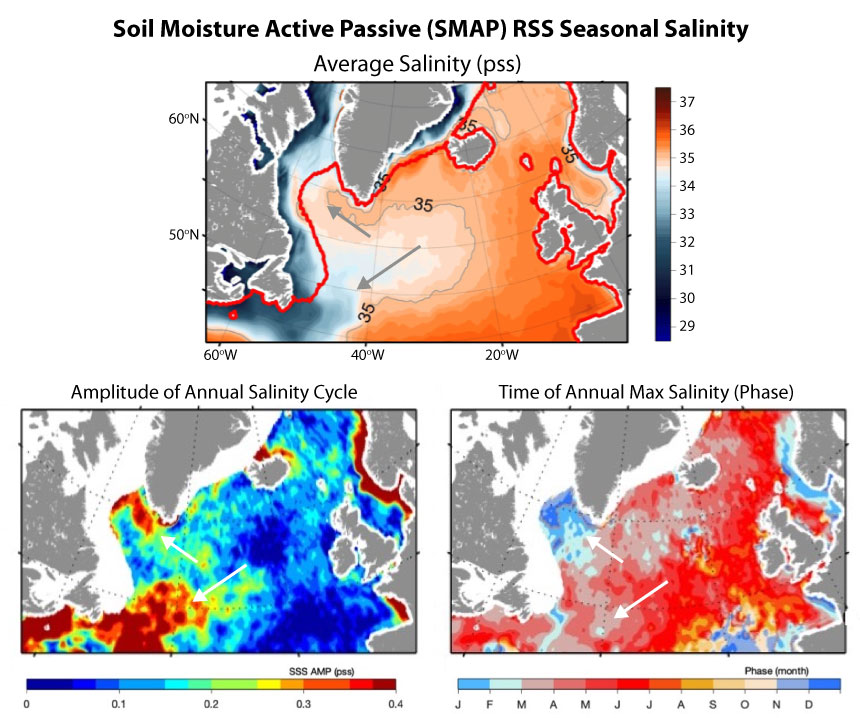 Key characteristics of salinity in the North Atlantic Ocean above 45° latitude: average salinity (top) with a thick red line indicating the boundary of seasonal sea ice, variation of salinity over a year (amplitude, bottom left), and the month salinity reaches its maximum concentration (phase, bottom right). The waters off the coasts of Greenland and Canada (arrows) highlight an interesting dynamic in the region - seasonal salinity changes are driven by freezing/melting of ice. As seawater freezes in the winter to form sea ice, freshwater is pulled out of the ocean into the ice, making the surrounding water saltier. When it melts in the spring, it adds freshwater into the ocean, making it less salty. In these areas impacted by melting sea ice (arrows) we see lower than average salinity, more salinity changes over the course of the year, and peak salinity in late winter just before the ice starts to melt. Credit: Yu (2020).
Indian Ocean 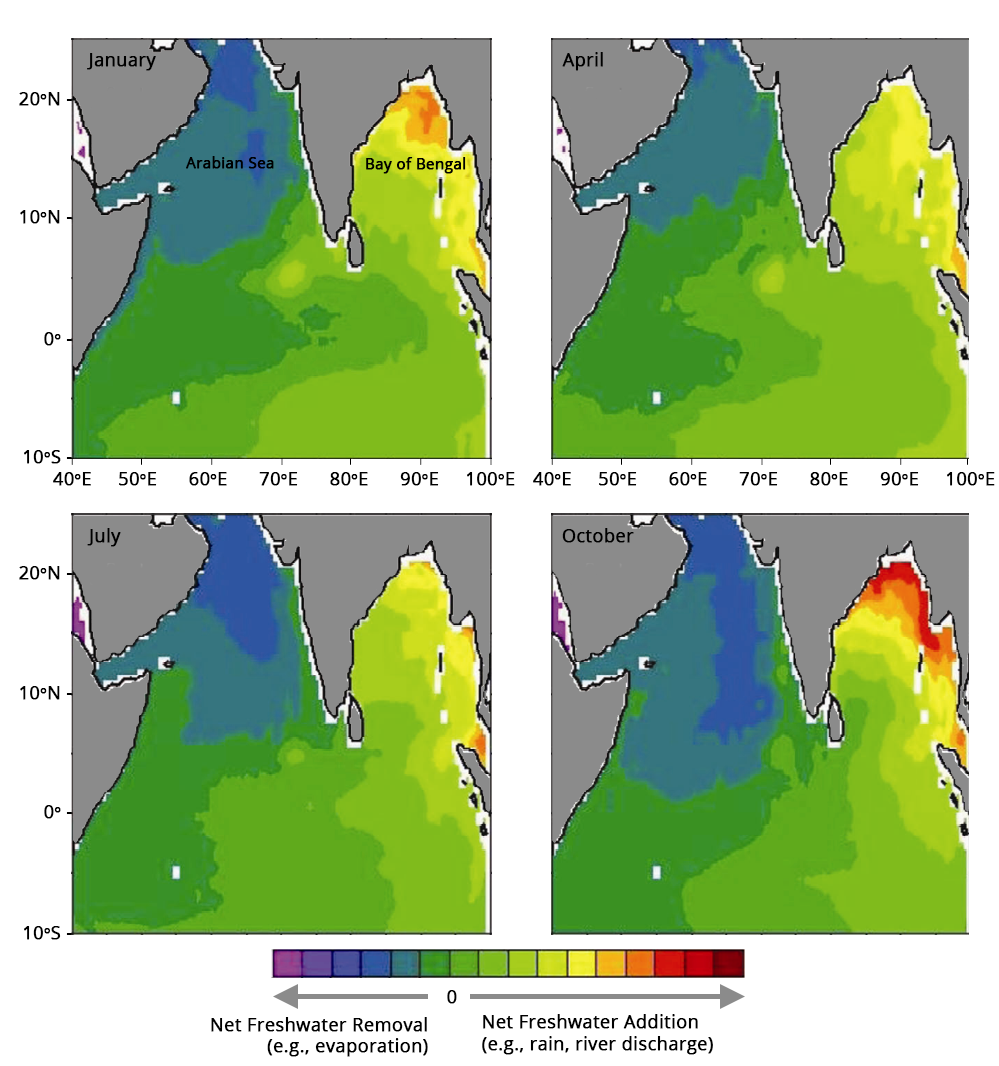 Seasonal salinity dynamics in the Indian Ocean are a tale of two basins – the Arabian Sea and the Bay of Bengal. The Bay of Bengal receives a large amount of freshwater (orange/red colors) from river discharge and monsoonal rains during October to January, seasonally decreasing its salinity. The Arabian Sea, on the other hand, gradually loses freshwater due to high evaporation (blue colors), increasing its salinity through the warm months of July and October. Thus, even though these two basins are on the same latitude and in very close proximity to each other, they have opposite seasonal salinity cycles. Credit: Ratheesh, et al. (2018).
Java Sea

Seasonal composites of sea surface salinity from SMAP satellite data. Note the area indicated by the white arrow. Here, seasonal precipitation and runoff from Kalimantan, Indonesia adds so much freshwater to the Java Sea that it creates a freshwater "plug" that cuts off the Indonesian throughflow current through that strait. Credit: Lee, et al. (2019). For more information on how this plug forms, check out this video by the study author. 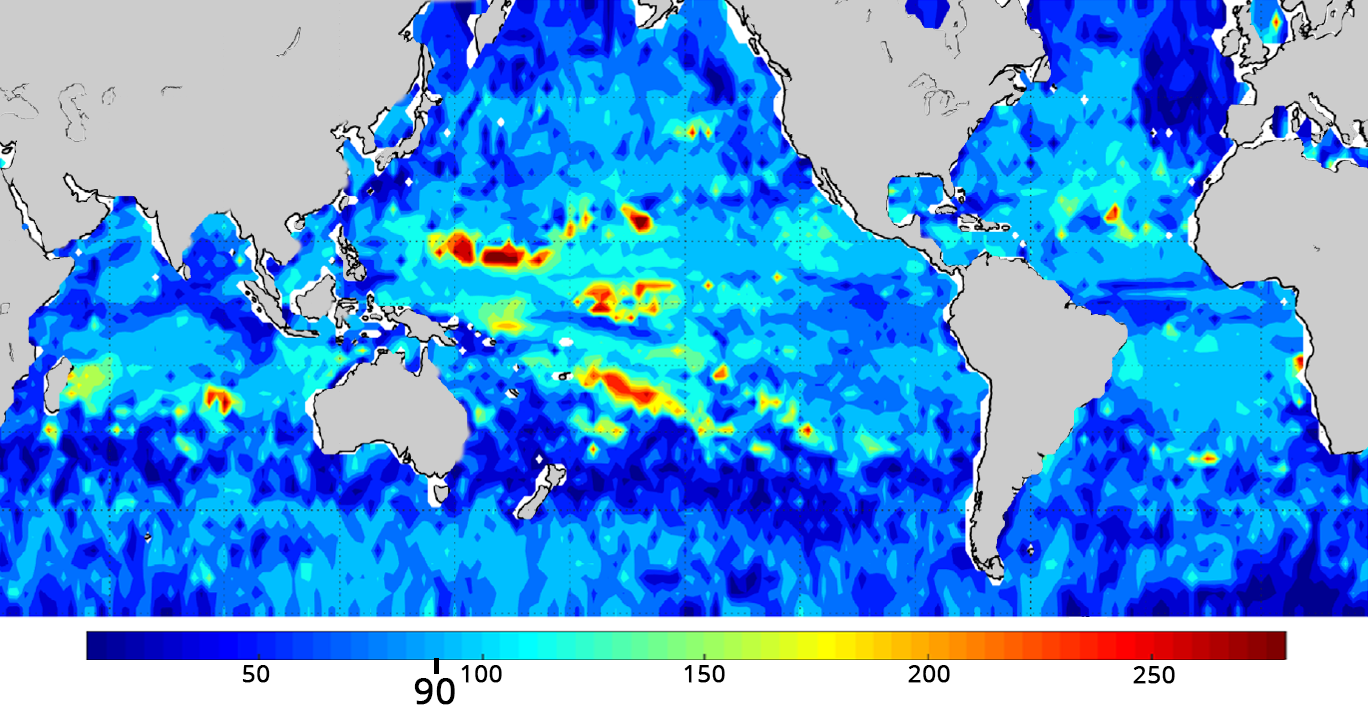 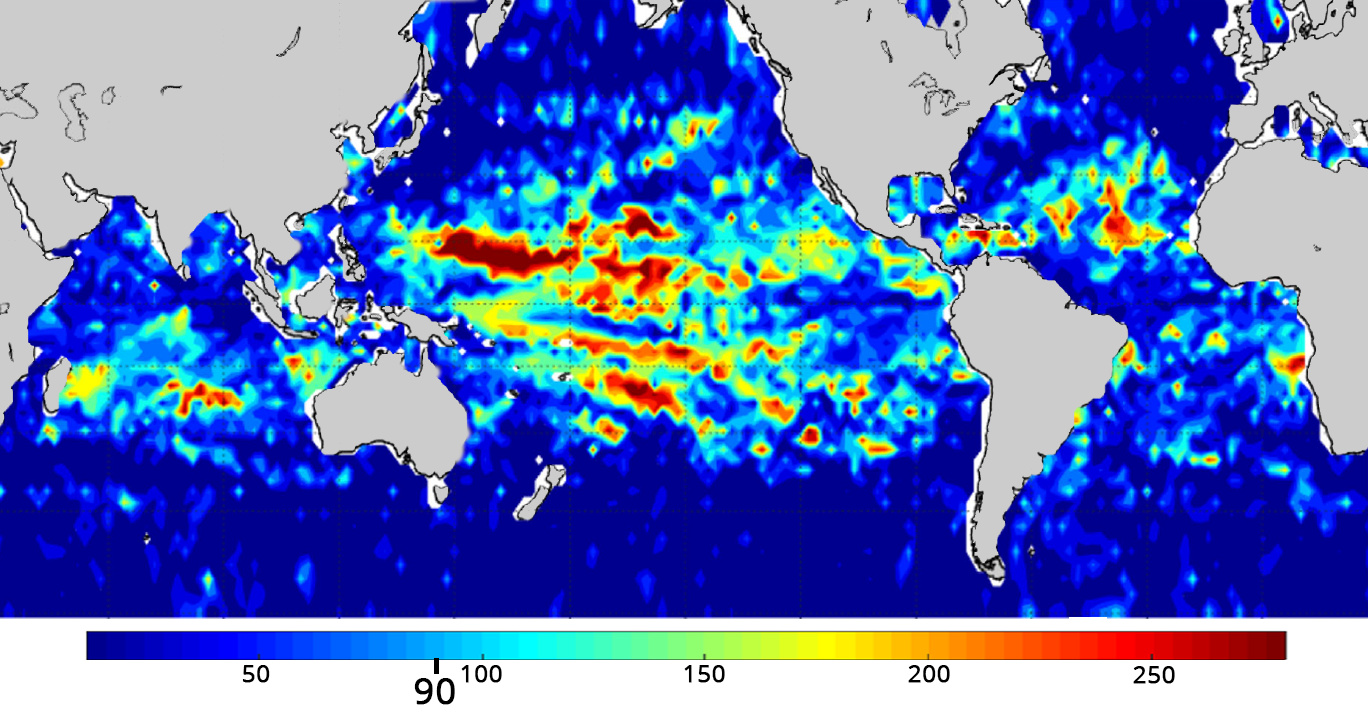 Maps showing the time scales over which salinity varies across the global ocean. Values are presented as decorrelation time scales in days. Left: Full data set. Note that most of the ocean has a seasonal time scale of about 90 days (medium blue). Right: Same data but with the seasonal cycle removed. High latitudes vary on short time scales (dark blue) due to precipitation events. Near the equator, variation is at longer time scales (red) due to El Niño/La Niña events. Credit: Bingham and Lee (2017).

This paper sought to capture the dominant harmonic patterns of seasonal variations of sea surface salinity (SSS) in the ocean. To address these questions, 2016-2018 data from four satellites were examined and compared to two in situ data sets (Argo and EN4) and the longer term World Ocean Atlas. Globally, the ocean had a strong annual harmonic - a defined cycle with one one salinity maximum and minimum during the year. Seminannual harmonics (i.e., two maximums and two minimums per year) were important in specific areas with unique weather patterns, namely monsoon regions and major rivers. 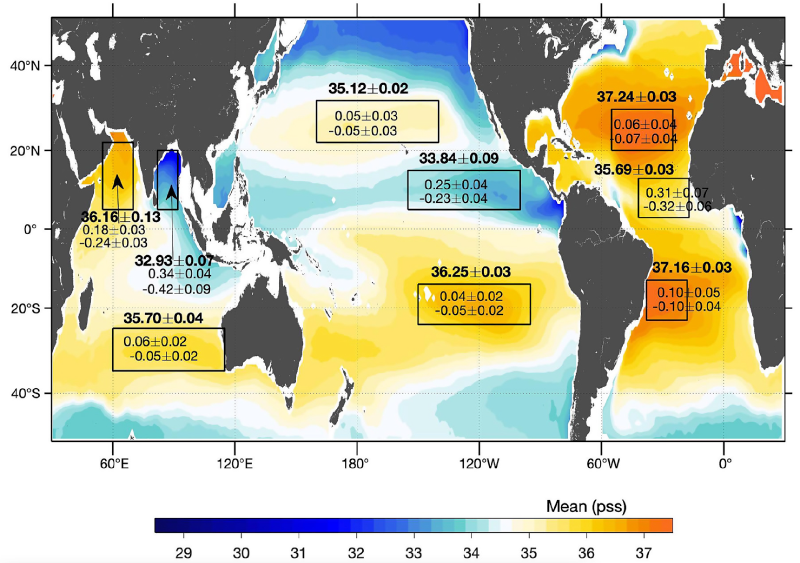 Most of the global ocean had an annual cycle of SSS less than 0.3 practical salinity scale. Areas with the greatest annual fluctuation in salinity were the tropical Atlantic and the Pacific in the Inter-Tropical Convergence Zone, the South Pacific Convergence Zone, and the northern North Atlantic with its seasonal ice melt. In general, areas with the greatest fluctuations were those influenced by freshwater sources - rainfall, river discharge, ice melt.

While Yu et al. (2021) focused on global, basin-scale sea surface salinity (SSS) over three years compared to the World Ocean Atlas, this article took the approach of examining the full 9 year satellite SSS data set and comparing it to the Global Tropical Moored Buoy Array at the level of individual moorings. The end results were similar, providing further support that satellites are able to observe the seasonal cycle of SSS and that we have a good understanding of the dynamics of that seasonal cycle. 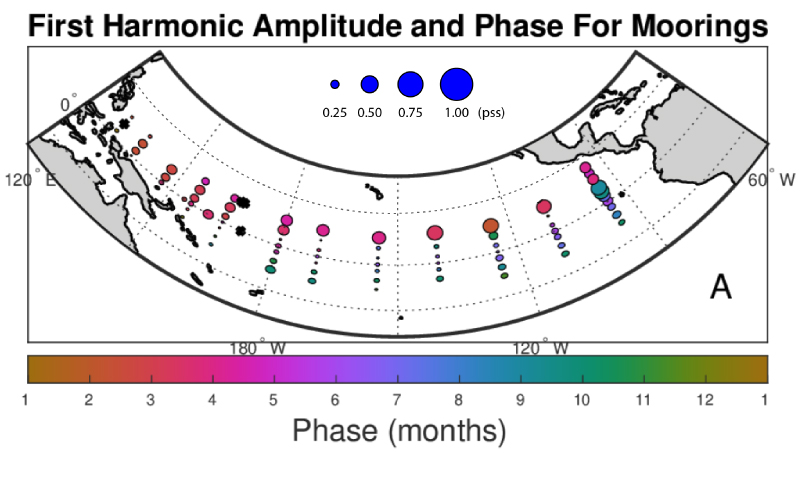 This map shows mooring locations in the Pacific Ocean. The size of each dot – whose scale is at top in blue – indicates how much satellite-derived salinity varies across the seasons (amplitude). Dot colors indicate the time of maximum salinity (phase) per the color scale at bottom (1 = January, 2 = February, etc.) Credit: Bingham, et al (2021). Click on the image to see data from other ocean basins.

This study found the satellite and mooring data sets to be comparable in that they showed the same seasonal features in salinity - the largest amplitude changes were by the Congo and Amazon River outflow areas, the western tropical Indian Ocean, and the North Pacific around 10°N. In the Northern Hemisphere, the time of annual max SSS (i.e., phase) was between February-May, while in the Southern Hemisphere it was between July-December. Outliers to this timing included the monsoon driven Bay of Bengal with its max SSS in October prior to monsoon season. 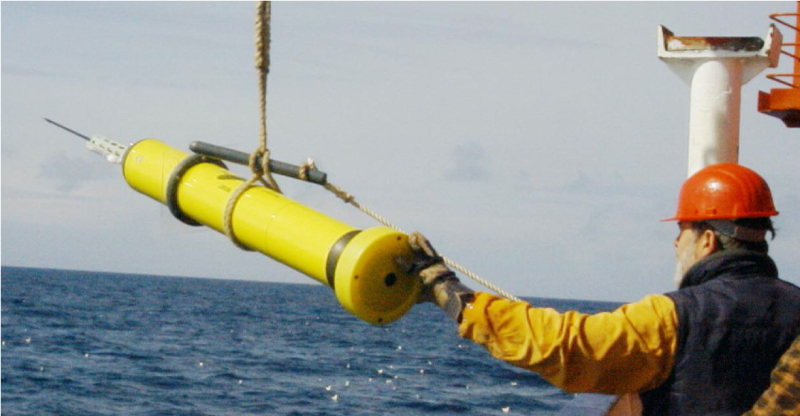 In this paper, ten years of Argo data are analyzed to learn more about climatology and seasonality of salinity in the global upper ocean. Note that many of the studies included in this highlight use Argo data to compare to satellite data, so although Argo floats are in situ sampling devices, they are instrumental in using satellite data.

Resources
Get the Data
Read More